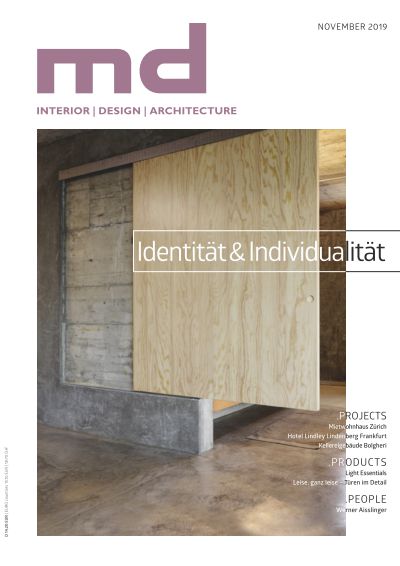 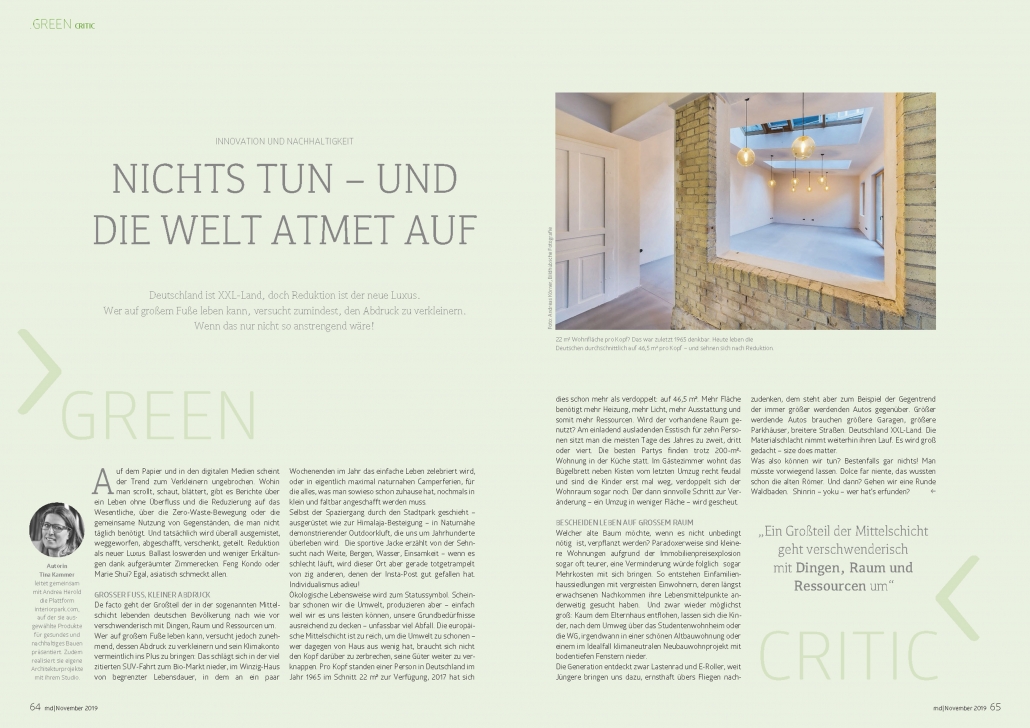 DO NOTHING – AND THE WORLD DO RESPIRE

XXL-Country Germany, but reduction ist the new luxury.
Those who are able to live like a lord, try at least to minimize their footprint.
If that would not be as exhausting.

On paper and in the digital media, the trend towards downsizing seems unbroken. Wherever you scroll, look, flip, there are reports of a life without abundance and the reduction to the essentials, about the zero-waste movement or the sharing of items that you do not need daily. And indeed, everywhere is mucked out, thrown away, abolished, given away, shared. Reduction as a new luxury. Get rid of ballast and fewer colds thanks to tidy room corners. Feng Kondo or Marie Shui? No matter, Asian tastes everyone.

De facto, the majority of the German population living in the so-called middle class is still wasteful of things, space and resources. However, those who can live on a large foot, increasingly trying to reduce its footprint and supposedly bring its climate account in the Plus: This is reflected in the much-cited SUV ride to the organic market, in the tiny house of limited life, in which a few weekends a year the simple life is celebrated, or in actually a maximum of near-natural camper vacations, for which everything you already have at home, again in small and foldable must be purchased. Even the walk through the city park happens – equipped as for the Himalayan ascent – in close-to-nature demonstrating outdoor air, which will survive for centuries. The sporty jacket tells of the yearning for space, mountains, water, loneliness – but if it goes badly, this place is just trampled by tens of others who liked the Insta-Post well. Individualism goodbye!

Ecological way of life becomes the status symbol. Apparently, we protect the environment, but, simply because we can afford to meet our basic needs, produce an incredible amount of waste. The European middle class is too rich to look after the environment – who does not have much in their own right, cannot worry about further scarcity of their goods.

Per capita, a person in Germany had an average of 22 square meters in 1965. In 2017, this has more than doubled to 46.5 square meters. More space requires more heating, more light, more equipment and thus more resources. Is the existing space used? At the invitingly large dining table for 10 people you sit most of the year for two, three or four. The best parties take place despite 200sqm apartment in the kitchen. In the guest room lives the ironing board next to boxes from the last move quite feudal, and once the children are gone, the living room even doubles. The then meaningful step to change – a move in less area – is spared. Which old tree would like to be transplanted if it is not absolutely necessary? Paradoxically, smaller flats are often more expensive due to the real estate price explosion, so a reduction would even entail additional costs. This is how old one-family housing estates develop, in which the long-time descendants have elsewhere sought their food items. And these children live again as big as possible. After escaping from their parents’ home, they eventually settle in a beautiful old building or, ideally, a climate-neutral new housing project with floor-to-ceiling windows after passing through the dormitory or the shared flat. The generation discovers cargo bikes and e-scooters, but the younger ones make us think seriously about flying, but this is countered, for example, by the counter-trend of the ever-growing cars. Growing cars need larger garages, larger car parks, wider streets. Germany XXL country. The material battle continues to take its course. It is thought big – size does matter.

So what can we do? At best, nothing! You would have to leave mostly. Dolce far niente, that was already known by the ancient Romans. And then? Let’s go for a round of forest bathing. Shinrin – yoku – Who invented it?

We may create cookies that are stored in your browser. We use cookies to see when you visit our websites, how you interact with us, improve your user experience and customize your relationship with our website.

Click on the different categories to learn more. You can also change some of your settings. Please note that blocking some types of cookies may impact the behavior of our website and the services we provide.

These cookies are strictly necessary to provide you with the services and features available on our website.

We fully respect it if you wish to reject cookies. To avoid being asked for cookies again and again, please allow us to save a cookie for your preferences. You can opt out or allow other cookies at any time to take full advantage of our services. If you refuse cookies, all cookies set on our domain will be removed. Our website (domain) stores and uses the following cookies in your browser:

3. aviaPrivacyMustOptInSetting
Value: true
Purpose: User must agree to the use and storage of optional cookies (OptIn).
Duration: 1 year

4. aviaPrivacyRefuseCookiesHideBar
Value: true
Purpose: For further page views, hide the cookie bar and refuse cookies and external services that have not been allowed.
Duration: 1 year

We also use various external services such as YouTube and ISSUU. As these providers may store personal data from you and save cookies in your browser, you can deactivate them here. Please note that if you deactivate these services, part of our offer will not be displayed to you.